WASHINGTON — There have been many quotable quotes over the ages, and most of them were said by men. Quotabelle.com features quotes by women and the stories behind the words.

Pauline Weger, the woman behind the website, has now compiled 110 of the quotes and stories into a book, Beautifully Said: Quotes by Remarkable Women and Girls, Designed to Make You Think. She says making you think is what the most powerful quotes have done for centuries.

“People would collect snippets in order to spark their interest in a concept or innovate an idea,” Weger says. “So quotations actually have a wonderful legacy of being a spark for writing. In today’s modern world, it’s fueled even further by how they’re spread through social media.”

The quotes in Beautifully Said – co-authored with Alicia Williamson, chief editor of Quotabelle.com – come from women around the world, and across the centuries, commenting on all aspects of life.

It includes a quote from Iraqi-British architect, Zaha Hadid, who passed away last year: “There are 360 degrees, why stick to one?” “She’s saying bring dimension to what you’re doing,” Weger explains. “I think she’s a good example of someone who really had to pave the way in a challenging world for women to succeed.”

Pakistani activist for girls’ education, Malala Yousafzai, the youngest Nobel Prize laureate, said, “One child, one teacher, one book and one pen can change the world.”

Weger includes a quote from chef and cookbook author Grace Young: “Preserve your culinary legacy, some day those recipes could be the one link we have to reach our loved ones.”

“We found that quotation through a blog post that she wrote about two years ago right before the Chinese New Year,” Weger says. “The story was that her mother would always for years prepare this traditional Chinese meal. And yet now her mother was dealing with dementia, so could not remember how to prepare a meal or anything really, frankly, about the Chinese New Year. So what Grace found was that when she prepared this meal, it created connections with her mother.”

Survivor, not a victim

Weger says many of the most powerful quotations in the book reflect women’s thoughts when facing challenges, such as this one from dancer Adrianne Haslet: “I’m not a victim defined by what happened in my life, I’m a survivor defined by how I live my life.” 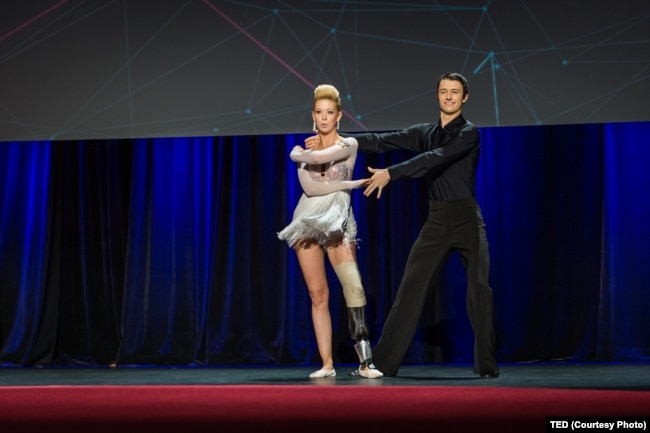 Adrianne Haslet took the stage for the first time since the bombing, for a rumba routine with dance partner Christian Lightner at TED2014 in Vancouver.

Haslet lost part of her leg in the 2013 Boston Marathon bombing, but a year later, was dancing again on a bionic leg. The quote is from a TV interview after the attack.

“One of the producers or someone said, ‘The victim in this’ and I said, ‘I’m not a victim,” she recalls. “A victim means that I belong to someone.’ Then I said, ‘I’m not a victim defined by what happened in my life, I’m a survivor defined by how I live my life.’ So, I refused to be called a victim. So they said, ‘Wait, say that again.’ And I said, ‘What did I say?’ Because I was so in the moment. When I wrote it down that time, it became a mantra in my life.”

Climbing mountains is the inspiration behind the quote from Alison Levine, the team captain for the first American women’s Everest expedition: “Sometimes you have to go backwards in order to eventually get to where you want to be.”

“People mistakenly think that we need to climb straight up the mountain, from base camp to Camp 2 to Camp 3 to Camp 4 then to the summit. That’s not how it works,” Levine says. The climber has to repeatedly come down to base camp to let the body slowly get used to the altitude.

Alison Levine (in blue) on her way up Mount Everest.

“This process is called acclimatization,” she explains. “When you’re high on a mountain, your muscles are starting to deteriorate, and your body is getting weaker. So you need to spend some time up to get used to the altitude, but you have to keep coming back down low so you can eat, sleep, hydrate and regain some strength. So you have to actually climb back down the mountain in order to get to the summit.”

“Sometimes when people don’t get a job they wanted or they don’t get a promotion that they want, or get transferred to another division in their company, they feel like it’s not a step forward. They feel like it’s a step back,” she said. “You have to look at these things differently. Look at it as an opportunity to regain some strength so you’re going to be even better in the future.”

Weger says she hopes Beautifully Said will inspire women and girls to create their own quotable quotes.